Plasma Canvas with Doom Scroll and Hosted by Kevin Dumont

PLASMA CANVAS are about to make their triumphant return to Washington’s with a bold new expanded line-up!

As of 2021, vocalist/guitarist Adrienne Rae Ash and drummer Evalyn Flowers have expanded the PLASMA CANVAS line-up to include bassist/vocalist Alan Hlavacek, guitarist Travis Mason, and guitarist/vocalist Abraham Dashnaw. Brace yourself, as PLASMA CANVAS aim to take their sound to places they’ve never explored while retaining the gritty, gut-punching emotional
honesty Ash is known for. And they’re bringing monstrous riffs along, too. You’ve been warned!

Sounds about right, considering that the first thing you hear on the KILLERMAJESTIC EP from Fort Collins punk band PLASMA CANVAS is the wild, visceral scream that kicks off the opening title track “KILLERMAJESTIC.” It’s a burst of pure, primal
emotion that sounds like vocalist/guitarist Adrienne Rae Ash’s actual throat is escaping from her body into the big, bad world outside. A blistering re-recording of a song from the band’s 2016 debut album, it’s a bold mission statement that reasserts
who PLASMA CANVAS is. When we re-tracked it, I knew that it had to be that intense. I wanted it to feel like what accepting your trans-ness feels like, which is terrifying. It’s like you’ve had someone holding your head under water for your entire life, and then you finally get up the strength to release yourself and take a deep breath and scream really loud.”

While Ash, with drummer Evalyn Flowers by her side, has now found that strength, and worked out how to channel her life experiences into brash, cathartic and emotional melodic punk songs, it wasn’t always so easy. She moved from her small hometown in rural Missouri to Fort Collins, Colorado in late 2015 to escape anti-trans violence. KILLERMAJESTIC was recorded at The Blasting Room with the legendary Bill Stevenson (Descendents). The sense of empowerment and catharsis is a constant throughout KILLERMAJESTIC’s five tracks, and something which infuses it with a real depth of meaning. Yet as much as it’s an insight into what Ash’s day-to-day existence is like, it also serves as a modern day portrait of being a marginalized person in the USA. As such, even though these songs aren’t explicitly political, they are also inherently political, because, as Ash points out on the band’s Facebook page, for her, even just existing is an act of rebellion.“People have asked me why I always write political music,” she says, “and the answer is that I don’t. Every single song on this new EP is completely apolitical, but the fact is that I’m a trans person, and my existence is up for debate even in left-wing circles. We have a lot of love songs and songs about
depression and songs about wanderlust and wanting to do better for yourself before you’re dead, but it all comes through as political just because of the fact that I live and I speak and I am. We live in Fort Collins, where 100 miles away there is an ICE concentration camp, and the fact I get to sing on a stage while people are sitting in cages just makes me feel so gross. I feel if I don’t use that platform to do something positive that might help somebody, then I’m wasting it. I don’t want to be another punk band with mohawks and leather jackets with studs on drinking PBR and doing coke in the bathroom. We want to be a little bit more than that.” 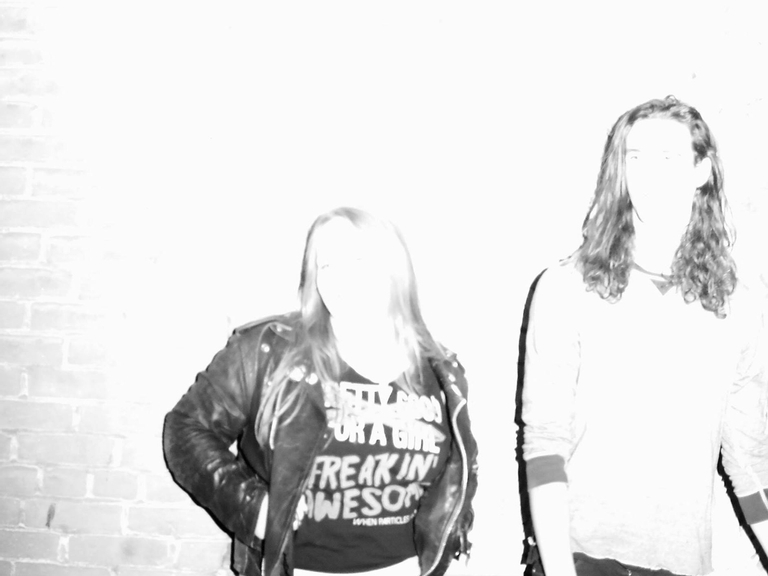